Not Every Whistle Blower Can Be a Collina But

Former Tottenham Hotspur striker Garth Crooks made a legitimate analysis on BBC Sport’s post-match analysis of the fiery London derby between Chelsea and Arsenal on Saturday, which the Blues won 2-0 courtesy of a Kurt Zouma header and a deflected Eden Hazard goal early and late in the second half respectively.

Before the goals however, it would not have been much of a surprise if the match had gone on to finish goalless, or to have seen either side steal a win with a fortuitous goal. Arsenal were hardly at their fluid best at Stamford Bridge but nonetheless were holding their own against a Chelsea side that can probably be seen as on a resurgence having secured back-to-back wins for the first time this season, scoring six and conceding none to boot.

Perhaps we could have been going on about how Jose Mourinho and Arsene Wenger managed a (rather frosty) handshake before kick-off but ‘forgot’ or were too occupied to share another at full time, with Wenger walking right down the tunnel while Mourinho, understandably, shared a warm hug with a man he still trusts completely, John Terry.

As we would have it though, in whatever realm of reality you choose to exist, the major talking point had to do with two Brazilian born players, each on either side who threw up what perhaps has been missing in a lot of so-called derby matches in the English top flight; tempers! 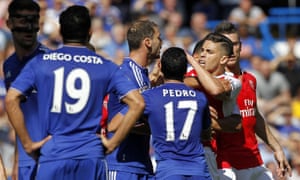 That happened just before halftime and imagine after such altercation, both players remained on the field for the rest of the encounter, all riled up and just itching for the other to as much as glance along their path for a proper brawl to break out and perhaps for more slaps to be served two or three involved faces.

Arsenal fans and many neutrals can go on all week about how  disgusting, despicable, unacceptable, unsporting, irritating and appalling Costa’s part in getting Gabriel sent off was but what is a derby if neither side has at least one player being a tick in the skins of his opposition all game?

Didier Drogba held a psychological card on Philippe Senderos and Arsenal for a long time, same hold Costa seems to be having on a lot of opponents in the Premier League having previously been involved in confrontations, but somehow not getting sent off in his ‘two’ seasons so far in the Premier League.

Which is why I agreed 100% with Spurs fan Crooks, ironically riled about an injustice to an Arsenal player when he said, “We all want to see 11 against 11. It’s a great game” and indeed it was, until referee Mike Dean felt it appropriate to send off one party in the altercation and leave the other on the field with just a yellow card for his troubles. Would not have been the 11 on 11 one wanted, but 10 on 10 was not a bad option at all. Alas.

Dean’s only fault as it turns out, was not showing that red card to Costa as well when he showed it to Gabriel for if he had, we probably would be scrambling for the best resolution footage of a classic tunnel bust-up between both players and possibly their teammates off the field and bench… along with the coaching staff… and both managers, tantalisingly.

However, showing just one red card brought an imbalance to what was – to that point – a contest of two sides looking to bounce back for different reasons. Instead, we were left to consume a largely one-sided second half (inevitably) which saw Santi Cazorla get himself sent off to add a feeling of injustice for Arsenal fans and a need for justification for Chelsea fans.

Good old days, one would have had a good time or held a proper grudge (depending on what side of reality you existed) at Martin Keown for (in)famously rubbing Ruud van Nistelrooy’s penalty miss in the final minute of that match between Manchester United and Arsenal at Old Trafford in 2003.

… but very few moments beat this ‘point driven straight home’ part of this moment of what used to be a proper rivalry.

After the incident (between Costa and Gabriel that is), Keown tweeted he would have loved to play against the Chelsea striker. That tweet reeked of an emotion missing in current Arsenal players and a whole lot at others club who have to be ‘appropriate’ or risk being farcically charged by the trigger happy FA for the comment deemed ever so slightly inappropriate.

The Arsenal manager and others of his kind should not always expect the opponent to play nice and allow the other team be the better team. That is not how the football gods (not Messi and Ronaldo but their mythical ancestors) ordained the procession to go, otherwise they would be a bunch of bored lawmakers who doze off during once-a-quarter sessions.

But all of that is for another feast of sporting battles.

Admittedly not every Mike Dean can be Pierluigi Collina great, not even Collina’s compatriot Nicola Rizzoli who saw PSV Eindhoven’s Héctor Morono get his Ryan Shawcross on and do a Ramsey on poor Luke Shaw during a UEFA Champions League encounter, which Manchester United eventually lost 2-1 with Morono scoring one of those goals for PSV.

Excuse me while I do a Crooks complimenting Dean before slating him, Rizzoli is a top official otherwise he would not have been named Serie A Referee of the Year in 2011, 2012 and 2013 nor would he have been chosen to officiate the final of the 2010 UEFA Europa League, the 2013 UEFA Champions League final and the 2014 FIFA World Cup final. 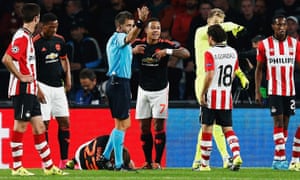 But in the Champions League group stage match in Eindhoven, Rizzoli covered himself in all the aforementioned adjectives for Diego Costa when he (for the benefit of doubt) forgot to book Morono for his rash challenge on Shaw. Had he done so, and given the player the red card he deserved, would PSV have won?

So, one must disagree with Crooks when he implied that referees should not try to be in the spotlight. In fact, they should have the spotlight right on them as much as the one beaming on Costa’s [insert adjectives] behaviour in order to make the referees realise how much their decisions actually impact on results.